The UK in-wheel electric motor engineering company Protean Electric Ltd have been acquired by
automotive giant National Electric Vehicle Sweden (NEVS) to get the technology the UK firm has
developed to market more quickly. Let’s look at the Protean Electric technology and see what this
could mean for the EV sector as a whole.

One of the most disruptive EV-Drive Technologies developed by Protean is the ProteanDrive in
wheel motor system. As the name suggests it is a motor that sits inside the car or van’s wheel.
According to a recent press release, “Protean Electric has devoted over a million engineering man-
hours to develop and validate its ProteanDrive in-wheel motor technology.” 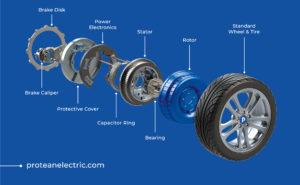 Essentially the entire drive system sits on the wheel, so only a battery and charging loom is
required to be added to the vehicle elsewhere. This means that with some thoughtful design,
almost any internal combustion engine (ICE) vehicle can be retrofitted with the system and turned
into a hybrid. This could mean an existing ICE fleet that needs to have a zero emissions capability
for entering cities’ low emissions zones could be converted for a far lower cost than replacing the
entire fleet with new hybrids or EVs.

For OEM machines such as the UK sports car company Ariel , or the Swedish hypercar makers
Koenigsegg (in which NEVS has a 20% stake) this can mean building completely novel machines
that are extremely exciting to drive and have longer distances between charging thanks to the
greater levels of efficiency and torque brought about by the ProteanDrive system.

The acquisition of Protean Electric will mean that NEVS can use the technology in its new vehicle
design and engineering, to include passenger cars, light commercial vehicles, urban mobility
vehicles and autonomous pods.

Based in Trollhättan, Sweden, and with 700 staff NEVS was “Founded in 2012 after acquiring the assets of Saab Automobile AB, NEVS seeks to shape mobility for a more sustainable future through a global portfolio of fully electric premium vehicles, mobility solutions, and sustainable city offerings”, according to a statement from the company.

In the announcement from NEVS, Stefan Tilk, CEO of NEVS said, “Protean Electric is an exciting
company with very competitive technologies. I am sure this acquisition will lead to many benefits
for both NEVS and Protean Electric”.                Under the deal, Protean Electric is to continue to trade independently, which will allow customers
from outside NEVS to buy into the technology. As with many startups with disruptive technologies it
will benefit from the acquisition by being part of a bigger company with access to what the NEVS
statement refers to as, “giving the company access to an even broader pool of skills, knowledge
and experience, as well as a sizeable customer in NEVS.”

Many smaller tech and engineering firms can only progress with their technologies and inventions
through being acquired as they are highly specialised and don’t always have the routes to market
that existing, larger companies have. As such for those who want to see more in-wheel motors on the road soon, this can only be a good thing. We could soon see Protean / NEVS provide solutions
at scale to last mile delivery companies for instance, that may be otherwise faced with huge bills in
order to meet cities’ emissions standards.