Could charging vehicles as they drive be the answer to the problem of battery tech never quite getting a breakthrough? A 5km stretch of Autobahn in Germany has been opened for a number of
vehicles to test a catenary charging system, while Sweden started trialling an in-road charging
system in 2018.

The problem of batteries
I’ve been in electric vehicles for the last three years and every three months we as a community
seem to hear that we are ‘just five years’ from battery technology making internal combustion
engines uncompetitive in terms of range and charging speed. That five years is from the mythical date when battery boffins finally work out how to reliably manufacture a high energy density battery that can be recharged in just seconds or minutes without catching fire. Car and truck manufacturers would then pay €€€ to the boffin to license it and then design the new battery into their powertrains. This is said to take around five years from the day the breakthrough is made. That could be tomorrow or 10 years time!

Fuel cells?
Hydrogen for its faults is being seriously considered as an option. It requires added size for the
vehicle as it can’t be stored at anything like the density of fossil fuels, and it costs obscene
amounts to extract and compress. We would need huge subsidies to make it compete with fossil
fuels as of today.

Mobile road charging
In the last week, the news came out that Germany is testing a five kilometer stretch of autobahn
with overhead catenary power lines to power heavy trucks. Clean Energy Wire reported, “After
years on a non-public testing ground, five hybrid test trucks will use the five kilometer long
autobahn section between Frankfurt and Darmstadt in the state of Hesse until 2022.” The vehicles
have their own battery and diesel engines and hit the autobahn to be powered over longer legs and then use their own power to go to their destination away from the European motorway network. 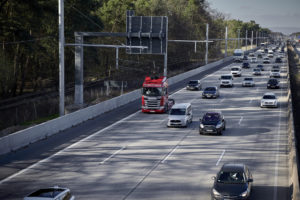 The catenary line system is only reachable by trucks. What about cars? Last year CNN reported , Sweden “is trialling the world’s first public road which allows electric vehicles to recharge while driving. Similar to a slot-car track, vehicles are able to connect to an electric rail that’s embedded into the road.” I have spoken to tech experts about this and someone having a pee on it wouldn’t be electrocuted, and nor will it cook wildlife as they walk over it – it is perfectly safe! This system can be used by cars however, so 100% of a country’s road vehicle fleet would be able to run on electricity unlike the catenary system.

Both mobile road charging systems would be installed on trunk roads across Europe and will allowfor vehicles to travel 70km or so from the network to their destination and then back to the network. On current battery technologies this is about right as battery powered heavy goods vehicles have abattery range of around 150km.

Cost?
It would be interesting to see how much a pan EU mobile road charging network would cost.
Including the departing UK, the EU is around 10.18 million square kilometers in size, reaching from
Ireland to Greece. That would require an infrastructure project that not even the EU has achieved
to date in terms of scale! We are however in an era where transport is undergoing nothing short of a revolution and radical ideas are required for capitalism to survive without destroying the planet. Billions of Euros are being spent as different systems are being assessed. Could a pan-EU mobile road charging system be the answer?