LG Energy Solution Ltd. (LGES) turning near $11 billion richer after IPO is discussing 40-Gigawatt hours (GWh) capacity battery joint venture in the United States with Honda Motor. Co. of Japan, which would make the third JV with finished carmakers in North America for the Korean battery major aiming to become No. 1 with more than 400GWh capacity by 2025.

Its CEO Kwon Young-soo ahead of the IPO bookbuilding session on Monday had said the No. 2 power behind global electric vehicles would soon announce a new finished car partner for a JV.

The Maeil Business Newspaper has learned the Korean battery maker was approached by the Japanese carmaker ranking No.8 in global car shipments at a time bilateral relationship between the two countries remain sour over wartime labor and other past issues.

The rare alliance between a Korean and Japanese industrial power comes amid effectuation of the U.S.-Mexico-Canada Agreement (USMCA) which requires 75 percent of auto content to be made in North America by 2025. 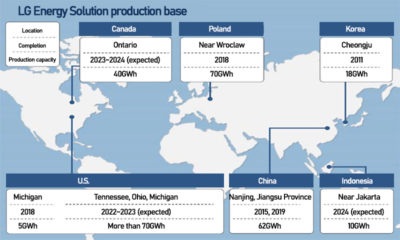 Details on the timeline, location, and capacity are yet to be decided, but given Honda’s outline to go fully electric by 2040, the factory capacity could be maximum 40GWh that can power 600,000 high-performance EVs annually. The factory would be ready to back Honda’s release in the U.S. from 2024.

Honda’s overture could be surprising, given the closed nature of Japanese enterprises.

Toyota Motor and Nissan Motor have set up joint ventures with local battery makers like Panasonic and NEC for supply. Honda joined hands with GS Yuasa International and set up Blue Energy. But Japanese battery makers have been falling behind in competition with Korea and China.

LGES current No. 1 in terms of capacity at 155GWh is out to overtake No. 1 player CATL of China in terms of global share by driving up economies of scale upon going public as the third most expensive Korean stock after near $11 billion IPO this month.

The company pledged to use 8.8 trillion won from the IPO proceeds to expand production capacity in North America, Korea, Europe, and China by nearly tripling capacity by 2025. More than half of the investment — 5.6 trillion won – will be made in North America and over 1 trillion won each in Europe and China. In Korea, the company will spend 645 billion won to establish smart factory processing and develop all-solid-state batteries.

The bulk of new expansion is centered in North American under USMCA bloc. 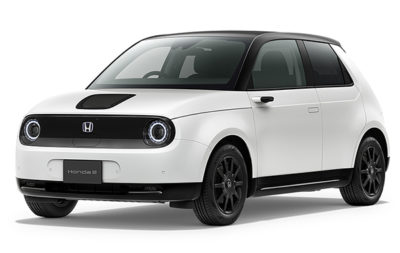 Ultium Cells is expected to officially announce construction of its third plant most possibly in Lansing, Michigan, before July this year. Total investment is projected to reach over $2 billion for the plant with more than 10GWh annual production capacity.

It is also in talks with Stellantis, world`s fourth-largest automaker, to build a joint battery cell and module factory in Ontario, Canada, with annual capacity of 40GWh to target U.S., Canada, and Mexico markets.

LGES is aiming to launch construction in the second quarter this year for production starting in the first quarter of 2024.

In Asia, LGES has partnered with Hyundai Motor to build a $1.1 billion joint factory with 10 GWh annual production capacity in Karawang, Indonesia. Mass production is expected to begin in the first half of 2024. Batteries produced here will be supplied to diverse vehicles including models based on Hyundai Motor and Kia`s Electric-Global Modular Platform (E-GMP). The Chinese plant built at a cost of 5.7 trillion won expects additional expansion in 1.5 trillion won scale for increased orders from Tesla.

The Poland base for Europe has a capacity of 70GWh at an investment of 6.8 trillion won and will draw another 2.5 trillion won for further ramp-up.

LGES in horserace with CATL of China is driving harder to command global leadership also through production mix and advanced technology. 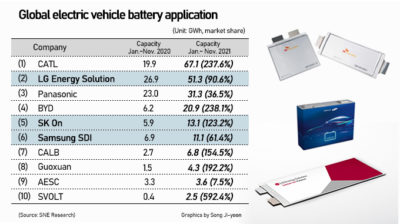 According to market research firm SNE Research, CATL deployed 67.1 GWh worth of EV batteries between January and November last year, taking up 29 percent of global market share and up 237.6 percent from the same period a year ago. LGES deployed 51.3 GWh for 22.2 percent market share during the same period.

Instead of standalone buildup, LGES and other Korean battery majors are opting JVs with finished carmakers to share the cost in manufacturing and ensure stable supply.

Shares of LG Chem, parent of LGES, continue to slide ahead of the IPO of the unit, finishing  Friday 5.2 percent lower at 716,000 won.

* New and used electric cars in The Netherlands on : EVTrader®