Battery electric delivery vehicles are already on our roads today. They have a major problem in that batteries are heavy, yet produce far less energy per kilogram than diesel engines. Many say that the solution may be in hydrogen fuel cell vehicles, as hydrogen is far more energy dense than batteries. There are problems with the concept though, that using today’s technology make hydrogen fuel cell vehicles less competitive than batteries. Let’s now look at the pros and cons of hydrogen in delivery vans and trucks.

Energy density is a major draw when hydrogen is compared to battery electric vehicles. According to a US Department of Energy paper, hydrogen stored at 5000 psi can produce 600 watt hours per kilogram, compared to lithium ion batteries that can produce a mere 150 watt hours per kilogram. Where it comes to delivery vehicles, that means you can have a far higher payload for a given range using hydrogen than you can with batteries. So far so good! 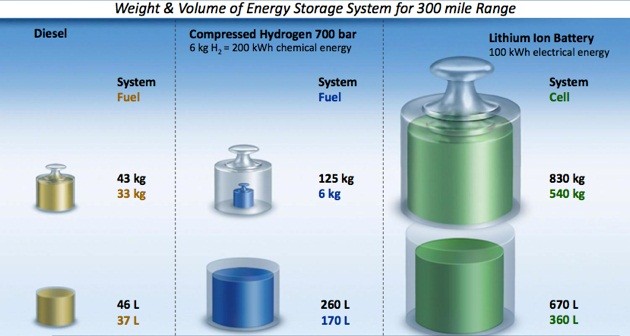 Hydrogen however is far less energy dense than diesel. According to the UK based Rail Engineer magazine, “A limiting factor for hydrogen is its energy density of 2.7MJ/litre (at 350bar on Alstom’s hydrogen iLint train) which is less than a tenth that of diesel (35.8MJ/litre).” This translates to 0.75KW / litre for hydrogen and 9.94KW / litre in diesel, meaning that for an equivalent journey you will need 10 times the amount of space to store hydrogen than you would diesel.

Another factor limiting the use of hydrogen in trucks is the cost involved. While at €0.10/km the cost of hydrogen as a fuel is almost competitive to that of diesel, the cost of the fuel cell power units is huge. Without subsidy, Dutch transport news site Niews Blad Transport stated, “the purchase of a passenger car costs 80,000 euros and a public transport bus of 12 meters costs no less than 850,000 euros. Also the lifespan of a fuel cell is still limited, so that it must be replaced earlier than the car has been technically depreciated.”

A final but very important aspect to rolling out hydrogen as a fuel is the extraction and fuelling infrastructure required. There is almost nothing in this regard in the Netherlands. Currently the cheapest way to extract hydrogen is from fossil feels at oil refineries, but hydrogen is meant to be a zero carbon fuel! The alternative is through the electrolysis of water, using renewable energy. These systems are increasingly available commercially through companies such as ITM Power. ITM Power has developed a system where hydrogen is extracted at the same site as the vehicles are fuelled. The issue is that for hydrogen to get a foothold in the country’s energy mix, at least 20 such extraction and fuel stations would need to be rolled out across the country. Considering one unit made by ITM Power cost in excess of €850,000, this is not something that can be lightly done without serious capital investment.

While hydrogen as a fuel does have its weaknesses, with government support it could still become an important feature in tomorrow’s energy mix. Particularly for long distance trucking, once the infrastructure and the cost issues are tackled, we could well see hydrogen powered trucks moving goods around the EU in the coming years. They certainly won’t replace batteries, but are likely to work alongside them as a power source.

Author: Richard Shrubb
Richard is a renewable energy, sailing and hemp writer based in West Dorset, England. Working hard to bring his rebellious three year old daughter up the right way, he attempts to live the lifestyle he promotes through his writing.