A coalition of Charging Organisations under the name Gridserve are to build a network of 100 dedicated UK EV-Charging Stations.

Electric Forecourts
According to a media release from Gridserve, “Each Electric Forecourt® will have dedicated zones for both private and fleet vehicles, such as taxis, buses, delivery vehicles and heavy goods
vehicles, and offer a new and compelling customer-focussed charging experience.” Customers
charging their vehicles will have access to facilities such as shopping, toilets and coffee while
waiting for their vehicles to be charged.
The charging network is to include 500kW charging units for cars in future, though while the current mix of vehicles (with their different charging systems) are on the road there will be a mix of
charging options on offer including CHAdeMO and Type 2 (Mennekes) systems before the planned
roll out of CCS high wattage systems for the next generation of EV’s. As such many of those
stopping in future will be there for no more than 30 minutes per stop.
For longer distance driving this is often the case anyway as people do not do 80% charges at each
stop, rather adding enough energy for the next leg according to EV-Charge planning systems like
the ZapMap Route Planner. 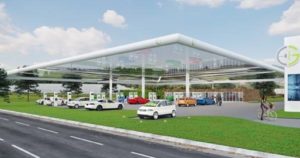 Gridserve say that many of the planned Electric Forecourts are to be directly powered by
sustainable energy farms. The company states, it “recently announced a pioneering new
commercial model for solar farms, battery storage and EV-Charging at its York and Hull solar farms. The projects have been developed in partnership with Warrington Borough Council in a £62 Million transaction that is expected to generate £150 Million for the Council over the project lifetimes to finance essential council services and urban regeneration. Construction on the first 34.7MWp solar farm and 27MW battery storage system at York is now underway, and construction of Electric Forecourts® at both sites is also expected to start before the end of the year.”

The current situation in the UK
In many countries, notably the UK, the market has been left to place EV-Charging Stations as it sees fit. That means areas with large concentrations of EV-Users often have a surfeit of EV-Charging deserts’ where whole regions of the country have virtually no charging stations at all.
This is why governments are better at infrastructure projects than private companies. Governments
at least in theory should not be worried about profit (though current neoliberal ideas make them
arguably more concerned about private companies’ profits than people as can be seen in cutting
rural bus routes) and should therefore drive a new industry by placing infrastructure where it is
needed, which is not always where a profit is to be had. 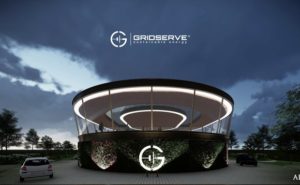 This brings about the question as to where these Electric Forecourts will be placed? It would arguably be better if some of these were placed in places of low demand to encourage more widespread EV-Use than in higher demand areas to generate bigger profits. In suburban North Devon where my mother lives for example, she is 15 miles from the nearest commercial EV-Charging Point, despite being a mile from the Atlantic Highway, a major road into Cornwall. That is not the biggest distance by any means from an EV-Charging Station. The question of infrastructure planning is reflected in the comment from an EV-User who saw the press release from Gridserve: “Their scheme of Gridserve EV-Charging Stations seems excellent, but we shall have to wait to see how these plans unfold to get any real idea of the added benefit to EV-Drivers in the UK.”

New EV-Charging Stations can only be a good thing…
The new network of Electric Forecourts should be welcomed at any rate. It shows the rest of the
UK market how to look after EV-Users while they are charging their vehicles. It will have multiple
charging units so there shouldn’t be massive queues of EV’s for a charging point (with the added
irritation of someone perhaps having too long a lunch while charging, delaying those further back!).
Many of these forecourts relying on local sustainable energy and grid batteries shows that there
won’t be too much demand on the National Grid as well. If more decent EV-Charging Stations like
these can be put in places where there are fewer EV’s on the road, so it could well encourage more people to go electric too!