Thuringia/Berlin, July 9, 2017 – Contemporary Amperex Technology Ltd. (CATL) is opening a European factory in Thuringia, Germany, as the region’s auto industry gears up to mass-produce electric vehicles (EVs).A project agreement between CATL and the Free State of Thuringia has been signed today as part of the German-Chinese intergovernmental consultations in the Federal Chancellery in Berlin. This signifies the first time that CATL is producing its EV batteries outside of China. The move emphasizes CATL’s commitment to the European automotive market in general and the growth opportunities electric vehicles represent in Europe and specifically in Germany.

Europe is one of the key regions for CATL’s strategic growth.The company underlines the market significance and potential by opening its first production facility outside China in Germany. The reasons for selecting Germany are manifold, and include

As the world’s largest lithium-ion EV battery manufacturer,CATL continuously improves the reliability and productivity of its products, there by driving the acceptance of the technology.With a total investment of 240 million Euros over four years, the highly automated new battery facility will be scaled to produce 14GWh capacity and create about 600 new jobs. The facility is planned to occupy a 70 ha space in the “ErfurterKreuz” industrial area.

For Thuringia’s Minister of Economic Affairs, Wolfgang Tiefensee, the investment is a“new milestone for industrial policy setting with a tremendous long-term effect”– for CATL itself, for the European automotive industry, but also for the business location of Thuringia. “The first European production site for battery cells ever, will be in Thuringia”, Tiefensee said. “The most important investment decision of the last ten years will catapult our state into the major leagueof battery manufacturing and research for years to come.”The state government expects to attract additional companies from the battery technology sector and materials supply industry, positioning it as leading in innovative EV technologies. 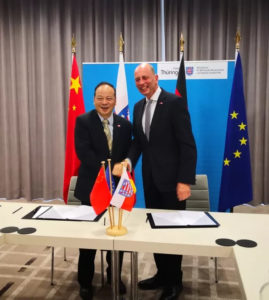 “After intensive negotiations over more than one year in China and in Germany we succeeded in persuading CATL of Thuringia”, Tiefensee continued.”We are pleased that a world market leader like CATL is relying on Thuringia to drive forward its growth and the development of its battery technology.”

CATL will set up a project company in Thuringia as an independent company which concerns itself with manufacturing, R&D and logistics.

“Building a smart battery plant in Germany is the first step in turning our European investment plan into reality. Developing a production facility in Germany will also deepen the collaboration between the European OEMs and CATL,” said Dr. Robin Zeng, Chairman of CATL. “By bringing the most advance lithium-ion battery technology to Germany and developing the local production capacity, CATL is strengthening its partnerships with customers. CATL is hence able to offer even better product solutions and faster response-times to our customers.”

“We believe that battery technology is a key pillar for the future of e-mobility,” said Robert Galyen, CATL CTO. “We are excited to bring our best-in-class automotive battery products and solutions to the European market.”

By building the new production facility in Germany, CATL is stressing its commitment to its European customers and well as underlining the importance of the European market as part of its growth strategy. Hence, CATL is best positioned to deliver innovative technologies to its customers in the future, which are being produced close to their assembling lines.

By December 31, 2017, CATL has 3,425 R&D employees, which representing 23.28% of total employees. CATL has branch offices in Beijing, Shanghai, Jiangsu and Qinghai in China as well as in Munich, Germany, and Paris, France, Yokohama, Japan and USA. For further information, please visit: http://www.catlbattery.com/.

It worth to mentioning that CATL has chosen The 3rd Asia (Guangzhou) Battery Sourcing Fair (GBF ASIA 2018) as its one and only exhibition partner in China, to exhibit its latest products on August. Besides CATL, other internationally acclaimed battery suppliers, such as Tianjin Lishen, Jiangsu Highstar, Shenzhen OptimumNano, Sunwoda, Dynavolt, Honbro, Han’s Laser, OMEC, TANAKA, and etc have also confirmed their attendance at GBF Asia 2018! 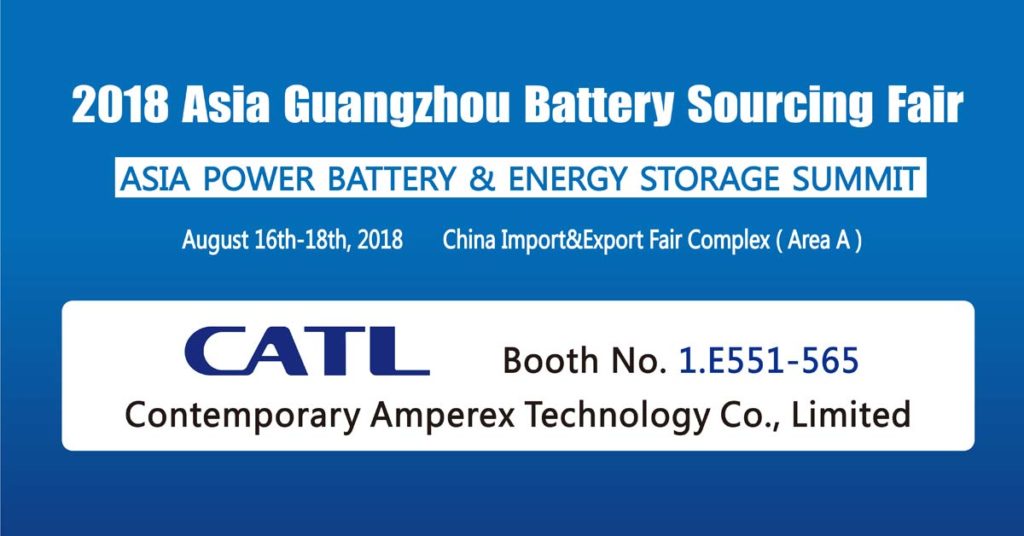 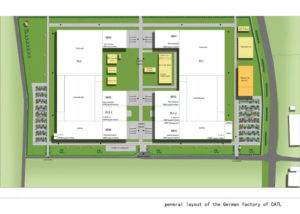 Pre-registration for overseas will be free of charge and the E-ticket for entering will be sent to you. Here is a quick link for pre-registration: http://www.battery-expo.com/order/order.php?id=46