Already for nine months in a row the new car registrations in the EU are down.

The war in Ukraine and the persistent chip shortage continue to influence the car industry.

In March 2022, 844,187 passenger cars were registered in the European Union. This is no less than 20.5 percent less than the same month last year. This reports Acea, the umbrella organization of European car manufacturers.

Acea explains the ongoing supply chain disruptions, exacerbated by the Russian invasion of Ukraine, as the main negative influences on car production. As a result, most countries recorded double-digit revenue declines in the past month, including the four main markets: Spain (-30.2%), Italy (-29.7%), France (-19.5%) and Germany (-17.5%).

Continued shrinkage
The passenger car market in the European Union also shrank in February. Then the contraction was 6.7 percent. Over the whole of 2022, there were 12.3 percent fewer registrations (2,245,976 in total). The previously predicted growth in new sales of almost eight percent in 2022 is therefore out of sight.

According to the report from the ACEA, the sharpest drop in new car registrations in the EU happened in the first half of 2020, corresponding to the first lockdown. The data shows that in 2021, sales were up by more than two times and they continued to go up, peaking in June 2020, March 2021 and June 2021. 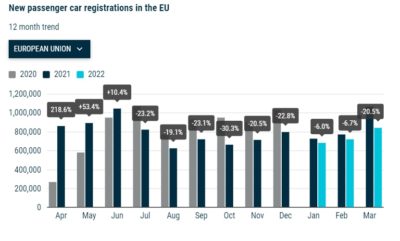 KIA still grows
Volkswagen had the most registrations (84,854) in the EU, but had to deal with a contraction of 29.1 percent. Toyota followed in second place with 51,891 vehicles (-10.8%). Almost all major car manufacturers shared in the malaise. The largest decrease was seen at Fiat: 37.2 percent (33,266 registrations). Kia was the only car brand to go against the trend, with sales increasing by 10.1 percent.