Europe is seeing double digit growth in Electric Motorcycles but from an extremely low base that means tiny sales in the sector – why is this the case?

Thanks to a much bigger motorcycling culture in Asia than in Europe, it may be seen as somewhat natural that Electric Motorcycles are selling extremely well. Motorcycles have socialised private transport, allowing people on very low incomes to travel further. By comparison car sales far outweigh motorcycle sales in Europe.

In March this year, Wired reported, “Global sales of Electric Bikes last year reached 40m, according to a recent report – and China accounts for 90 percent of this.” Across Asia there are some 400 million motorcycles on the road – almost as many as there are people in the European Union!

While much focus of the European press has been on the explosion in all EV sales in China the majority of those sales have been on two wheelers – not just EV Cars that still well out-sell the European market. This is because people don’t have the same average incomes there as here and in the UK motorcycles have a reputation as being dangerous for the rider.

In Europe Electric Motorcycles are tiny compared to China. In February, Visor Down showed a breakdown of electric motorcycle sales. While overall growth in terms of percentages looks great – 81.5% – the actual numbers on the road aren’t that impressive at all. One of the biggest markets for motorcycles in the EU is Germany, with 620 electric motorcycles sold of a total 156,108 motorcycles sold in 2018! The Netherlands came in third with 809 sales and France, 1526. That doesn’t amount to a drop by comparison to sales in China of more than 30 million!

What’s holding Electric Motorcycle sales back in the EU? 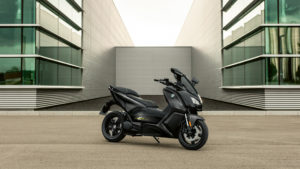 There are only three European Electric Motorcycle manufacturers – BMW which makes the C evolution and KTM Sportmotorcycle GmbH are established companies while Sweden based Cake has just released their first street-legal motorbike in the last week, the Kalk&. Meanwhile one of the best known UK marques, Triumph, are only now surveying their owners as to whether to go electric.

Motorbikes are the original low emissions vehicles. They are lightweight, run on small amounts of fuel and can achieve a great range per litre thanks to their power to weight ratio that will never be as bad as cars. One of the most fuel efficient motorcycles on the market today is the 125cc Honda NC7 that is rated at 84mpg, and with a full tank can do a good 384km.

A comparable Electric Motorcycle is the Super Soco TC-Max that the motorcycling magazine MCN says can do 128km per charge. From personal experience the idea of riding 128km on a 125cc motorcycle is painful and hard, but this issue of range is still something people complain about!

Bigger bikes that are more comfortable on a longer run still don’t compete with range – the new Harley Davidson that can do less than 160km. The Tesla of Electric Motorcycles, the US road hog Brutus V9 can do a claimed 448km per charge. That would test the non-stop-riding limit of even a hardened  Hells Angel! While it is nice to see what an electric motorcycle can do it would be nicer still if all Electric Motorcycles could do the same.

Another issue facing motorcycle sales of all stripes in Europe and nearby is safety. In the UK in 2016, there were 104.5 motorcycle fatalities per billion passenger miles as against just two (2) in cars. That suggests that road safety is holding back all motorcycle sales – not just Electric Motorcycles. Until there is a significant modal shift from four wheels to two, making it safer for motorcyclists, we just won’t see the volumes of sales change in two wheeled electric or ICE vehicles.

As to the future?

There are major policy efforts underway in all major European cities to reduce pollution and congestion. Some cities are better at getting people onto two wheels than others – Copenhagen and Amsterdam are leading lights here – while the likes of London struggle behind. Where two wheeled transport becomes the norm, so safety rates should improve, and that in turn should help drive the Electric Motorcycle market. As to range? It can be fixed as can be seen with Brutus, but the industry as a whole needs to catch up with the market leaders for a silent Electric Motorcycle to whizz past you in stagnant traffic regularly on Europe’s roads in future.