Despite difficult circumstances and the pandemic’s negative impact on the the automotive industry, electric vehicles made a giant leap forward in many countries in 2020. According to estimates from industry tracker EV-Volumes, plug-in electric vehicles accounted for 4.2 percent of global light vehicle sales last year, up from 2.5 percent in 2019. While just eight countries reported an EV share of 5 percent or higher in 2019, 13 countries managed to push electric vehicles past 10 percent of new light vehicle sales in 2020. Like in prior years, Norway was a positive outlier with a 75-percent share of plug-in electric vehicles, while Iceland, Sweden and Finland also featured in the top 5 – a testament to the quick adoption of electric cars in nordic countries. China, which is by far the largest market for electric cars in terms of unit sales, fell out of the top 10 with electric vehicles accounting for 6.2 percent of passenger car sales in the country. Meanwhile the United States fell further behind with an EV share of just 2.3 percent.

While Norway’s policy measures (e.g. tax exemptions, toll exemptions and other incentives) did prove highly effective in promoting electric cars, the Norwegian model cannot be easily transferred to other countries. First and foremost, the country imposes hefty vehicle import duties and car registration taxes, making cars significantly more expensive than say in the United States. By waiving these duties for electric vehicles, Norway is effectively subsidizing EV purchases at a level that a larger country such as the U.S. couldn’t afford. Secondly, Norway is a very wealthy country (ironically thanks to its oil reserves) with a high level of income. According to Norway’s national statistical institute, the country’s median household income after taxes was around $54,000 in 2018, which is roughly level with the United States but more than twice as high as the EU average. 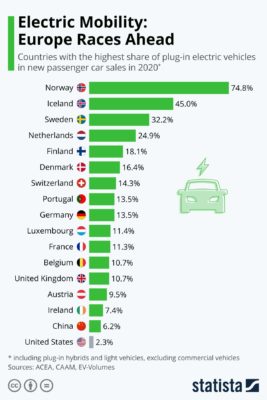