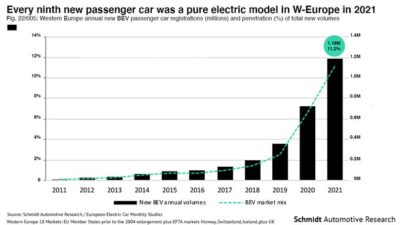 – The Netherlands was the only market that witnessed volumes fall (-12.5% y/y) over previous year levels. This was likely linked to company car drivers already in BEV lease cycles (as reported in the November report), taking advantage of lower tax rates in previous years. Private customers also played a role, likely holding back their electric car purchases back until January 2022 when a new quota of government-private purchase subsidies (€3,350) entered into force.

“Before the champagne bottles are popped in celebration of a record year, with more than every tenth new passenger car arriving on West European* roads being a pure electric vehicle in 2021 – 2020 was almost half that rate at 6.4%, which appeared impressive at the time, given the #CO2 boost in December last year – it is worth adding some perspective, given the BEV booster year we just witnessed, was in a total passenger car market that recorded its worst year for almost 40 years.”

In a normal average 14.2 million passenger car market year that same volume of BEVs would have equated to just 8.4 per cent mix of the market, giving perhaps some indication to how the market would have looked in a ‘normal’ non-pandemic year, where the word ‘semiconductor’ would have remained in the lexicon of just a handful of experts.

However, the 11.2 per cent BEV mix in 2021 will claim most headlines. (Covered in the November edition of the study).

The bitter-pill and paradox is the realisation that plug-ins were likely being favoured by manufacturers with limited semiconductors in order to off-set their most profitable and consequently highest polluting vehicles in a form of carbon off-setting in order to meet European and UK CO2 fleet average legislation in a form of damage limitation mode which worked out surprisingly well for their bottom lines.

When the IEA publishes its dataset on the European car market later this year we are likely to see this reflected in a jump in the mass average weight of new vehicles in 2021 rocketing skywards.

More in the full study each month…

* New and used electric cars in The Netherlands on : EVTrader®