Diesel pollution is now seen as a public health issue in cities around the world. While there is
pressure to drive the public onto public transport and out of their motor vehicles, there is an
obvious issue to this – diesel buses pollute too! Battery Technology has long been sufficient for an
average urban bus’s daily travel and now the total cost of ownership (TCO) has fallen for electric
buses to the point that they are cheaper to run over their lifespan than diesel, there are hardly any
reasons to seriously consider renewing a fleet with diesels.

Let’s break down the perceived barriers to an urban bus fleet going electric.

Range anxiety
The mainstream media loves to attack electric vehicles on basis of their lack of useful range.
According to an answer in Quora in 2014 , an average London bus travels 35,600 miles per year.
Assuming 364 days’ use, this would mean 97 miles per day.

Let’s face it – anyone can answer a Quora question. A 2014 ZDNet article looked at Chicago
Transit Authority (CTA) bus journeys and estimated 81 miles per day. If the two figures were
averaged, we would hit 90 miles or so a day. 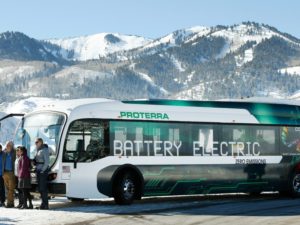 The ZDNet article was promoting the US based Proterra bus manufacturing company that even in those days claimed that its hybrid diesel-electric bus could manage 700 miles per day. 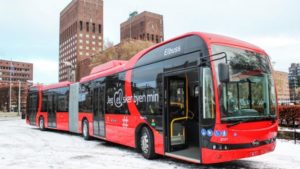 Daily hybrid vehicle range can be phenomenal, especially if you use no electric! Chinese owned BYD however show their pure electric buses can happily manage 125 miles per day, or 35 more than the average distance a bus will normally travel while carrying passengers. Do you need a 700 mile range when 125 is more than ample?! 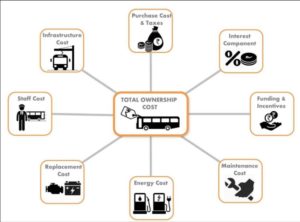 There are two streams of costs associated with electric buses and diesel buses. The capital cost of
the vehicle is how much you pay upfront to get the vehicle into service. The next set of costs is the
running and maintenance costs. Added together you have a Total Cost of Ownership (TCO), which
will come out of the bus company’s bottom line. The cheaper the TCO the more profits the bus
company can make.

Let’s turn this into miles and stretch those savings out to a 364 day year: 52,416 miles x $0.096 per
mile = $5,031.94 a year savings by using an electric bus over a diesel bus. In London there are
around 850 buses, so across the fleet that would equate to something over $4.277 million a year in
savings. Given the slim annual profit margins of transport companies, that could put a smile on
shareholders’ faces!

Congestion and pollution
China has led the way with the roll-out of electric buses in its urban centres. It is widely held that
the country deploys more new electric buses every day than the entire fleet of London’s buses.
Electric buses haven’t been anything like so popular in the US and EU, yet with companies like
Daimler Benz entering the market with its Evobus brand, the reasons not to go electric seem to fall every day. It really does seem that the water’s lovely – so jump on in!