The Hanseatische Fahrzeug Manufaktur GmbH (HFM) announced it is to use the Elaphe L1500 direct drive motor in its electric and autonomous minibus platform with a view to getting In-Wheel Powertrains on Europe’s roads for the first time.

A lot of technology companies have been looking at the In-Wheel Powertrain. It is far more efficient than the traditional system where the electric power goes through a transmission system to the wheel, and is said to be able to deliver up to 90% efficiency. By comparison, an ICE Powertrain only has a 20% efficiency in city driving conditions. 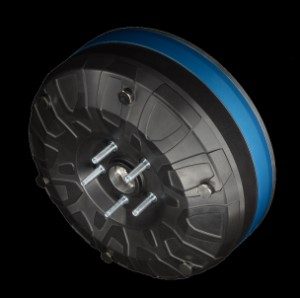 Another advantage of the In-Wheel Powertrain system is weight distribution. Many of the electrical powertrain components can now be housed in the wheels as opposed to the rest of the chassis. Urska Skrt, Head of Business Development at Elaphe said: “Elaphe’s patented electromagnetic topology allows our motor design to be highly scalable, light-weight and the most compact on the market. Combined with intelligent motor control, it is the most simple and modular electric vehicle propulsion that enables ultimate packaging and user-centred design.” 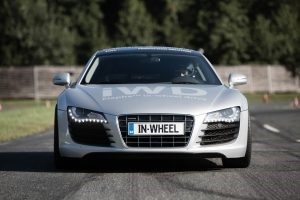 Near instant torque is an advantage of all electric powertrains but the In-Wheel Powertrain is said to make a real difference. Late last year a team of Elaphe technicians put four Elaphe L1500 motors on an Audi R8 supercar and the results were eye-watering – in early acceleration tests the converted vehicle did 0-100kmh in 3.5 seconds. The team now plans on tuning the system to get the test car to do it in sub-3 seconds, trashing the acceleration times of the Tesla Model S. 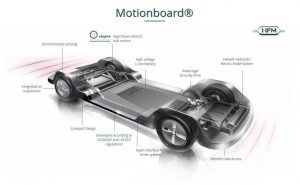 From high spec to minibus

It is one thing playing with concepts but HFM are planning on getting this In-Wheel Powertrain system on the road, and is as much concerned with whizz-bang technology as it is in putting a system together that will be licensed on Europe’s roads. In-Wheel Technology matures.

HFM saw the advantage of putting more or less the same system as went into the Audi onto an autonomous minibus system they are developing. “As a company focusing on compliance with all the requirements for type approval and homologation within the framework of existing and future legal provisions, reliability and safety are of course at the top of our list of priorities,” says Friedrich Soost, Head of Mechanical Development at HFM and responsible for the mechanical integration of the Elaphe In-Wheel Motors into the Motionboard platform.

With the partnership between HFM and Elaphe this means that we will likely see a system that has largely been the realm of boffins in development labs, on Europe’s roads in the next few years. This means that the system will have matured, unlike many other EV-Technologies that frequently never get out of the laboratory. Could other Powertrain Manufacturers follow suit? That will depend on market uptake but if it does, then it could issue in a new epoch for EV-Powertrain.