Automotive companies like Ford, GM, Waymo and even Baidu are testing last mile delivery vans that may well drop the cost of parcel deliveries in years to come as part of the coming ‘unmanned supply chain’. ‘Final mile’ and ‘last mile’ refers to the last stage in the supply chain journey from the depot to the customer.

When you think of a last mile autonomous delivery vehicle you may imagine the Starship robot trundling down the street with a few kilos of groceries or a snack for a geek at a tech campus. These are a great first step towards taking people out of last mile delivery but they are limited in their size and capacity. The next big step in final mile delivery is to be autonomous vans with similar payloads to the Ford Transit carrying large numbers of packages to multiple end customers. 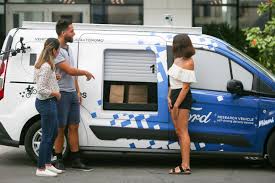 The next big step in final mile delivery is to be autonomous vans with similar payloads to the Ford Transit carrying large numbers of packages to multiple end customers.

Humans are dangerous and expensive
One of the big drives to getting rid of people from the supply chain is that they are expensive to ‘operate’. They need wages, break times and things like holiday and sickness pay that all feed into the cost of delivering parcels to the end customer.

Another issue is that no matter how safe professional drivers are by comparison to amateurs, they still make mistakes. Accidents cost money and injuries to people caused in those accidents are not something the delivery company wants!

The unmanned supply chain is known to be the end point of many autonomous vehicle technologies today. While they will not happen in the next 10 years, tens of billions of Euros a year are being invested in the drive to that end point. Let’s now look at four companies listed on b2bev looking to take humanity from the driving seat for final mile deliveries. 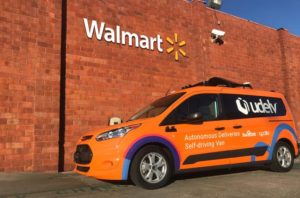 Early this year, news reports came out that US retail giant Walmart is testing Baidu autonomous vehicle technology on grocery delivery vehicles. Udelv is a California based self-driving startup that uses the Baidu Apollo 3.5 autonomous driving platform. According to Walmart, “The pilot program with Udelv will take place in Surprise, Arizona. What’s really cool is that Udelv will utilize a cargo van custom-made to deliver fresh groceries – hand-picked by our personal shoppers – to customers.” 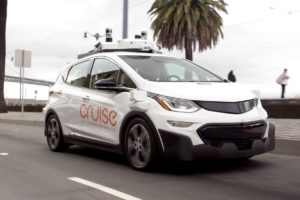 A small fleet of autonomous GM delivery vans are being tested for hot food delivery in the world’s metropolitan Centre of Technology, San Francisco. The Verge stated in January that these vehicles are to be tested in ‘early 2019’, adding, “Under the pilot, Cruise’s self-driving Chevy Bolt vehicles will be used to make grocery and restaurant deliveries for DoorDash customers in San Francisco.” It isn’t known how many vehicles are being used, but it is known that the GM Cruise delivery vehicles will be used in the same areas as the Cruise taxis operate.

At the Consumer Electronics Show (CES) in Las Vegas Ford announced it was doing an autonomous final mile delivery trial in Miami. Fleet Europe reported, “Ford designed a Transit Connect with security code operated rear and side lockers to secure the load and allow it to serve multiple customers on the route.”